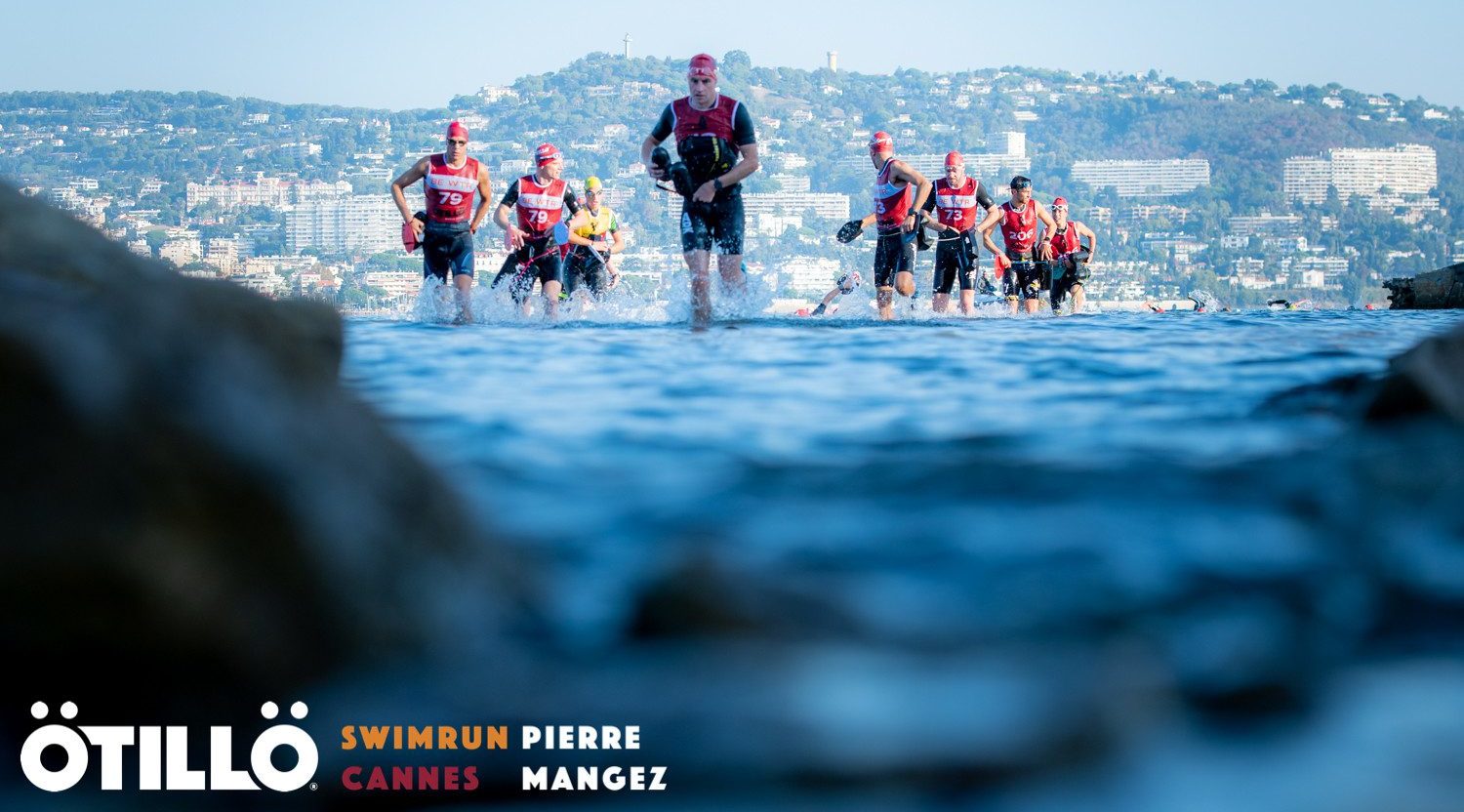 Arriving in the French Riviera, swimrun.com’s Fred Newton takes part in the World Series race and the 5th edition of ÖTILLÖ Swimrun Cannes.

ÖTILLÖ Cannes doesn’t fit any sort of mould and has been described as the most varied course in the ÖTILLÖ World Series. It felt like being in Disneyland, with plenty of challenges and delights in store for the intrepid participant.

The sharp and dramatic contrasts one encounters through the different stages of the route make it an intriguing day out. The ease of access is a big plus and the sea swimming through crystal clear waters is divine.

The start of the World Series race is at an old fort on the island of Sainte-Marguerite. There was a pleasant babble of noise as we milled around in the courtyard chatting and enjoying the early morning sunshine. It was a relaxed start, there was nowhere to be but the present.

Both islands were beautiful and quiet, the smell of cedar and pine trees on the air as the field quickly spread out. Those at the front of the race jostling for position and the rest of us finding our place in the pack.

We crossed over to the smaller monastery island of St Honorat and in the race briefing were told to swim between a red and yellow buoy on one of the swims. No more detail on this specific instruction, I assumed perhaps there was an obstacle in the water or area used for fishing.

The slightly cryptic briefing became clear and to my astonishment, large stone heads appeared in the depths below. They were mesmerising. I slowed my pace to glance over these underwater figures and later learnt that they were of local people and part of an underwater museum.

The Long Swim Back

Sadly, our time on the islands had to end and it was time to head back to the shores of Cannes.

Swimming from an island to the mainland is an epic feeling. In Homer’s Odyssey, the hero Odysseus completes a marathon swim before washing ashore. You feel like this ancient hero, where only determination and effort will see you across the strait. Sea monsters lurk in the deep.

There is a point where you are about halfway, far from anything. No other swimmers in sight as the swell has picked up a little bit.

It is you and your teammate travelling through a vast expanse of sea. The sea at this moment feels huge, and you tiny.

This swim was perfect in many ways, and upon arriving at the mainland it felt like one chapter had closed as we prepared to enter the city.

The City of Cannes

It is a brave decision for the organisers to trail-blaze a route through the heart of Cannes. And that is exactly what happened as we dodged shoppers and ran past diners enjoying coffee and croissant. Horns blared and it was busy and loud, a sharp contrast to the magical life of being on the islands.

Red ribbons and chalked ÖTILLÖ markers led us through twisting streets and up many stairs as we climbed higher and higher into the hills above Cannes. Police and marshals stopped cars as we pounded the pavement now running through the suburbs of the city.

The trails appeared out of nowhere as we veered off the roads, it was a relief to escape the crowds. A cruelly placed aid station came into the view at the top of the hill but a marker sign sent us off for another few kilometres of trail before the treats of the aid station could be enjoyed.

To my surprise, the trail running only got better as the course went on. The highlight of it was a sharp and steep climb up a disused railway track, overgrown with weeds and home of lizards. Our hearts pounded and breath quickened on a seemingly never ending gradient.

Now it was onto ‘the jungle trail’, a scramble down a small stream in a steep sided valleys. We climbed over fallen trees, crawled through through drainage tunnels and slid down steep banks. Walking is the only option here, and I imagined the grumbles of speedy runners having to carefully pick their way through. It was a reminder that you are in a swimrun, and on an adventure race.

10k PBs matter not when there is a tree to climb over.

A Tangle With Jellyfish

The jungle trail led us back to the sea and a stony shoreline, which happened to be a nudist beach. The grumpy gaze of the occupants fell upon us and with all haste we entered a blind swim around the headland. Nudists are private folks after all and were pleased to see the marginally better clad swimrunners leave them to peace on their rocks.

Entering the next swim, we were helpfully warned of jellyfish being blown close to the shore and to swim out to avoid them.

Suddenly and to our horror, a swarm of jellyfish were all around us. Avoiding them was impossible. My partner Jon was stung on the face by a jelly which then ricocheted off and stung me in the arm. This was the start of a painful encounter, we doggedly swam on and were stung multiple times on the arms, neck and legs. Electric crackling noise filled the air. Our pace quickened.

I don’t resent the jellyfish, we were swimming through their domain. We were guests of mother nature, but the stings were sharp and painful all the same and reaching the swim exit was a relief.

Cannes is a laidback and friendly city on the French Riviera, our hosts for much of this was a sleek 5-star hotel, Hotel Martinez. The final 50m or so dash up a red carpeted gangway, a nice touch to enjoy a comfortable finish line on the beach to sit back, enjoy a beer and chat with friends and family.

Michael Lemmel of ÖTILLÖ was there to greet us with a warm and genuine smile. His energy and enthusiasm was infectious, despite standing in the heat all day.

ÖTILLÖ Swimrun Cannes is an explosion of the senses. You can’t deny the enjoyment factor of this carefully designed and clever course. The city of Cannes is incredibly well connected and as such is a lovely way to spend a weekend with friends and family.

ÖTILLÖ put on a great show and are back for the final race in the season in Malta in a few weeks time.