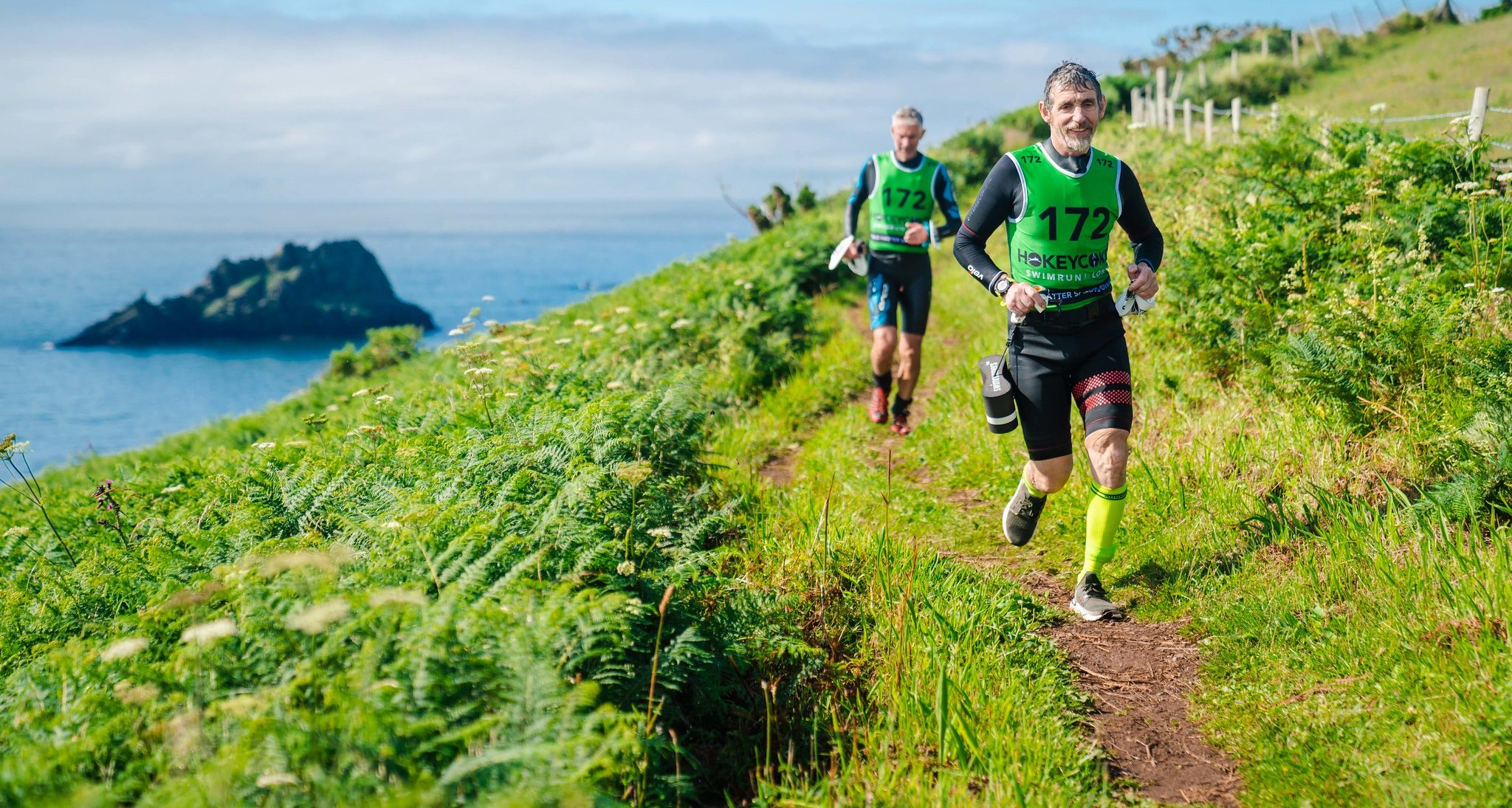 Mad Hatter Event’s John Yelland organises some of the wildest swimrun races in the UK. He’s a friendly guy with a frankly astonishing depth of creative enthusiasm. This energy translates into a portfolio of unique races including the Hokey Cokey Swimrun Series.

How did you get into swimrun?

John was watching the random sports channel on TV and the ÖTILLÖ race flicked on. He thought it looked amazing and came up with an idea called ‘bay hop’ which was to become the Hokey Cokey Swimrun, one of the first swimrun races in the UK to run in 2015.

St Austell Bay, the original race kicked the 2022 UK swimrun season off in May. John recalls that the ‘event was amazing, great conditions and lovely weather with a superb atmosphere and lots of friendly faces’. The race at the front of the long course was intense with three teams and one solo competitor battling it out across the course with Team Precision Hydration winning overall and Tim Wood winning the solo event.

John’s highlight however was at registration where two ladies (who were doing the long course as a team) asked how the runner get to the next transition. They thought it was one person runs and the other swims. They were in for one massive surprise!

What makes a good swimrun course?

A swimrun course always has to fit with the location. The key components which make up a good course include adventure, fun, an element of risk, stunning scenery, good food and a pumping atmosphere.

For the Mad Hatter crew it is about longer swims. The two swimruns in the series have striking differences, St Austell’s Bay is according to John more of ‘cuddlier’ course with beach exits. Roesland by comparison is the grumpy older cousin; a gnarly adventure scrambling over rocks.

Tell us about the early days and your first ever swimrun?

John and his crew designed a figure of eight course with the remit to be ‘as tough as they could make it’. 50 people rocked up for the first event. On the morning of the race, Race Director John was jittery, a huge swell had come in which impacted whether the race could go off or not. They pressed on. The reaction of participants (for many this was their first swimrun experience), was sheer confusion coupled with unbridled joy.

Where does the name Mad Hatter come from?

The team had a load of ideas of which Mad Hatter was one and they intended to do themed events using the Mad Hatter characters (Alice, the March Hare, the Mad Hatter and a Dormouse). But this never happened and the name has stuck!

What is the vibe at races?

The Mad Hatter team always try and create an atmosphere. It’s all about the small things. According to John, everyone ‘gets a high five’. Everyone is celebrated, the last person across the line has often had to really push themselves and dug deep to get to the finish line. There is an encouraging and friendly community around it all.

What are your plans for the future?

Mad Hatter offer a range of races celebrating different ways of journeying through the sea, growing that portfolio of events is one ambition. John is tentative about expansion out of his home in Cornwall, in part due to the fact that he has a full-time job with host of other events in the portfolio. But never say never.

Finally, what one piece of advice would you give to a first-time swimrunner?

Don’t worry. Everyone will look after you just go do it. Go on and explore it! Try it all out.