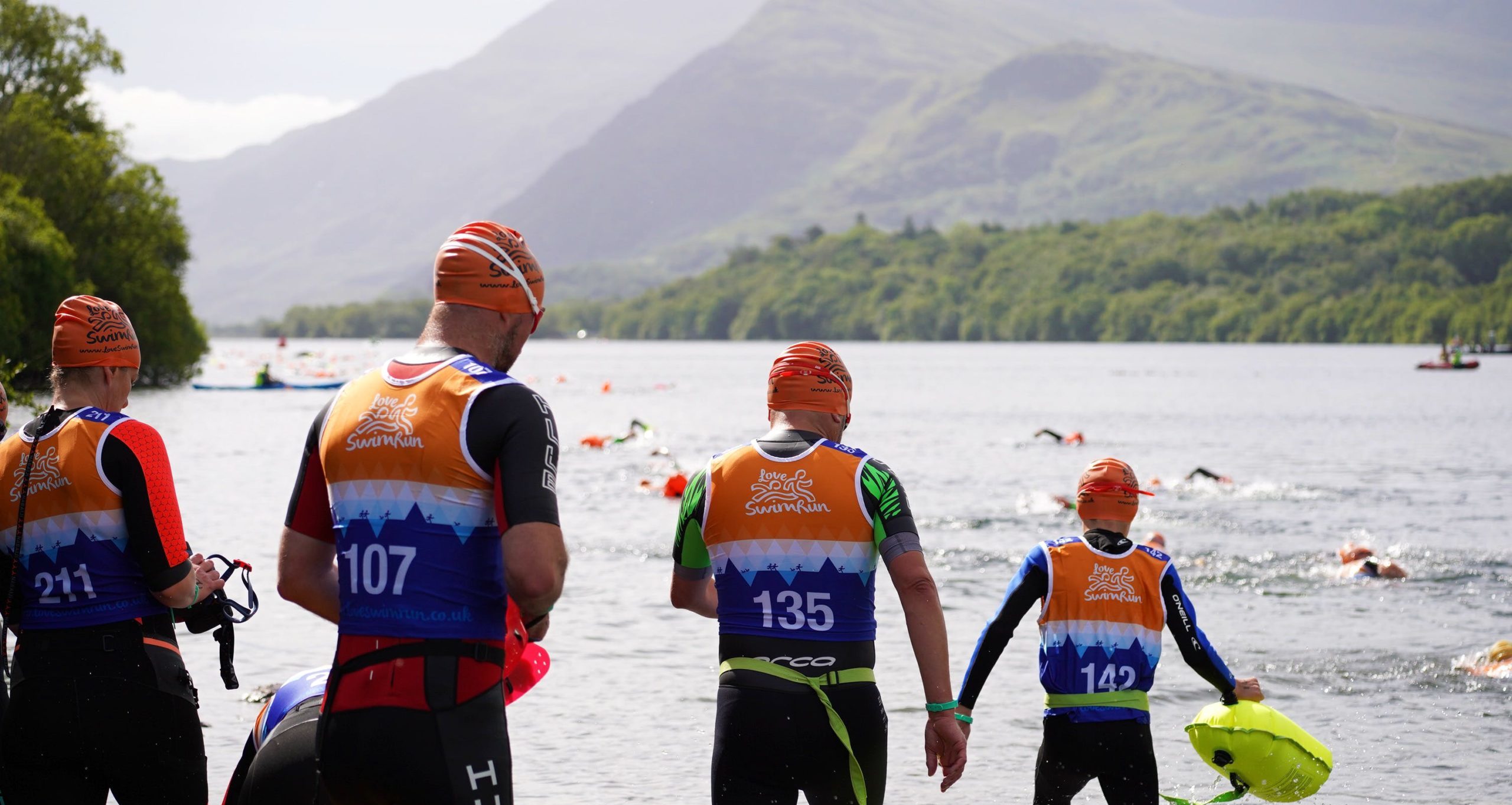 Swimrun.com’s team of Fred Newton and Jon Littlewood headed to North Wales for the Love Swimrun Llanberis Full Course and first time together as teammates.

Love Swimrun Llanberis is Wales’ original swimrun renowned for its welcoming atmosphere and varied course, hundreds of excited participants congregated on the shores of Llyn Padarn in the village of Llanberis eagerly looking forward to the day ahead.

After some last minute faffing, we make it to the start pen with a few seconds to spare. Moments later the race begins and we were into first run which is a short, fast and flat. Jon and I set into a good rhythm and despite getting very warm, lead the pack into the first swim.

As we approached the swim entry which has lofty mountains rearing up on the other side of the lake, our transition routine took over. Goggles on first, release the pull buoy, hand paddles on and go go go!

Jon led the first swim choosing an aggressive line which hugged the shoreline. Looking behind me, what appeared to be a steam train was ploughing through the water at breakneck speed. The Cornish pair of John Yelland and Derren Blewet flew past, and were to be the first pairs team across the line.

Our next swim was utterly sublime and my favourite one of the day which recrossed the lake with mountains in the background before a sharp dog-leg turn up a lagoon. Although we were still in the Llyn (Welsh for lake), it felt like swimming along a narrow tropical river with lucid green vegetation on both sides. Locally, this section is known as ‘crocodile alley’. Thankfully no crocodiles were seen.

It was intoxicating and incredibly beautiful

The Crux Of The Course

The centrepiece of the course is a tough unrelenting climb that winds its way up into the old slate quarries which is a UNESCO World Heritage Site, looming high over the valley. Nearing the summit you run past a mammoth old slate pit, where climbers are scaling the faces as small as pin pricks. It is a stark and interesting contrast to the rest of the route.

Coming from a mountain running background, I was looking forward to this 8km hilly run section. An opportunity to pull back some time and emptied the tank working hard and dragging my teammate up.

We gleefully passed the mixed team of Lorraine Smith & Michael Shaun Coggon who we had been yo-yoing with on the climb, they shouted ‘we will get you on the next swim’, which they did.

The slate quarry gave way to trail running at its best: exciting, rapid and technical. Inviting swimrunners to go fast and risk slips or take it slow and enjoy the trail.

Jon led the fast downhill as we went as quickly as possible, we both grinned from ear to ear, it was all over far too soon.

Earlier in the day we had past Dolbadarn Castle, a legacy of Llywelyn the Great who was an important local character in Welsh history. I wondered what he would have made of neoprene clad swimrunners passing near his ramparts.

A Sting In The Tail

Coming into the final swim we were in a decent position to be on the podium. Swimrun is first and foremost about the experience and adventure, but it is also exciting to race and be mildly competitive.

As we approached the final swim entry, the transition routine kicked in ‘goggles on, release pull buoy, paddles on’. But something was wrong. Jon had stopped in his tracks.

I’ve lost my goggles bud, you need to lead the swim’

As the weaker swimmer in our team, I was less than thrilled to hear this. Swimming without goggles is slow and hard work for the swimmer. As we were tethered together, as the lead swimmer I would also be expending a lot of energy towing Jon. The wind had also picked up and was against us. We made glacial progress on the final 1km swim.

We eventually make it across the finish line, tired but having been around one epic adventure. The course had thrown up challenges and we had to work through unexpected difficulties as a pair. This is the ‘secret sauce’ of swimrun, working with teammate and having a story to share after.

Love Swimrun Llanberis is such a varied and interesting course, it showcases the best of some of the local history while giving you a fine and varied swimrun race. We loved it.

For Race Director Chloe Rafferty, it was a relief to be able to put the event on again after a two year absence. Reflecting on her highlights, she enjoyed welcoming back familiar faces after a tricky few years.

Along with the old faces, there were also plenty of new faces. Love Swimrun Llanberis has a relaxed and inclusive vibe, great for beginners and people wanting to give it a go.

Being responsible for several hundred people’s safety doesn’t come without it stresses. However for Chloe it is ultimately a rewarding job, seeing the smiles of friends new and old cross the finish line.

Chloe wanted to reiterate her thanks and give a huge Love Swimrun shout out to the marshals and organisation who were superb and the race couldn’t have happened without them.