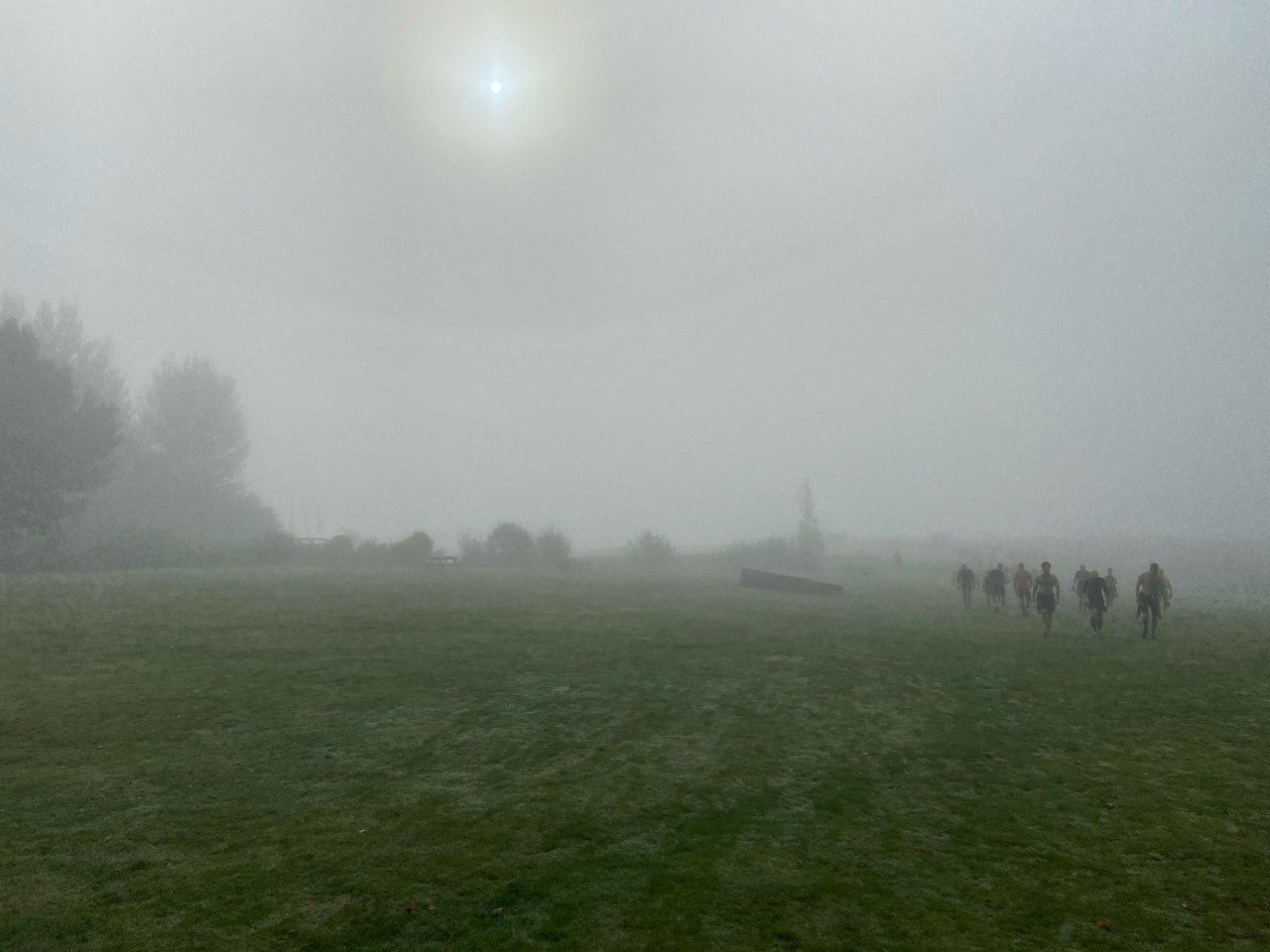 Alex Sheen, who is new to swimrun this year reports on his race at Bewl Water. Bewl Water is As Keen as Mustard’s 3rd race of the season and one of precious few in the South East of the UK, making it extremely popular among the many triathlon and running clubs in the area.

Offering 3 distances, a Super Sprint/Intro 6km, 10km distance, and 21km which covered a full lap of the reservoir, As Keen as Mustard continues to deliver excellent events that are accessible to new comers to the sport (such as me!) and those seeking a more challenging day out!

The exceptionally dry summer had markedly reduced water levels at Bewl Water leading to a pre-warning to athletes that the swims might be shorter, and the runs longer….not welcome news to your author who is much better swimmer…. Recent heavy rain then brought the extra “fun” of water entries and exits to become rather boggy and threatening to claim several items of footwear (guilty!).

Race day began with some unseasonably thick fog, delaying the start of all races until visibility was sufficient for safety. Visibility was so poor, swim outs were not visible from swim ins – not something we expect on a warm Septembers day in the UK! Nicky and Chelsey Bailey, directors of As Keen As Mustard, kept everyone well updated with the situation and revised plans. The delays also created more opportunities for mingling with other athletes, swapping thoughts on kit, encouraging new comers and spotting faces from Strava.

Eventually, the fog clearing from the other side of Bewl Water from the start, the 21k race was started at the waters edge, ensuring safety kayakers could corral the pod in the right direction. Shortly after, the 10km and 6k races were released.

Fast Out The Blocks For The Super Sprint

Racing the Super Sprint distance for the second time this season, it was as ever on this category, truly off to the races. The front of the pack set off like a rocket for the mile+ run to Swim 1. As is often a feature at As Keen As Mustard events, distances in course maps are fairly vague and runs in particular last longer than hoped for me.

This first run delivered probably my favourite swimrun moment to date. As we ran across the top of the reservoir dam, the 21k race was swimming along the base, a writing mass of paddles and shoes forging through the mists – it was quite a special moment to behold from our high vantage point. By the end of Run 1, I was desperate for the water to cool off (having delivered a 1 mile PB!) and we crashed into the back of the 10k and 21k races delivering a glorious swim experience of hundreds of swimrunners all together.

I was pleased to find all the extra paddle work in the pool paid off and I charged through the field leaving the first swim in 2nd position (despite almost losing a shoe at the start). The next 20 minutes delivered a continuous back and forth for 2nd place. Each run I’d concede to the faster runner behind me, only to go past on the swims. A great mix of terrain was on show, a run along the rocky shoreline evoked dreams of travelling to Scandinavia, short single track uphills efforts demanded much of already burning legs and the low water levels made every swim-in a downhill charge at the water.

Hitting the last swim, I knew I had to give myself as much cushion as possible for the mile and half run to the finish if I was to hold off those behind me. It was not enough and with #1 already in the distance, I was caught on the dam, egging on my fellow swimRrnner to finish strong. Legs burning and sweating buckets under the now blazing sun, I pushed towards the finish delivering my second fastest mile….

A Sting In The Tail

At the race briefing we had been warned of the uphill to the finish, little did I know Bewl Water would have a heartbreak hill of its own…

…with 200m to go, and going as fast as I could, I was stunned to be overtaken by another runner sending me back into 4th place. It was a disappointing and yet thrilling end to the race, the top 4 all coming home within 80s of one another. Collapsing in a heap at the finish, and scrabbling inside wetsuits for our flexible cups, we shared a moment of congratulations for a hard fought race. As a swimmer, the long run legs at the start and finish were too much for me on a day that favoured those who can crank up the pace when they need it!

Bewl Water delivered a grand venue for swimrunning with an impressive mixture of terrains and challenges proving again that great swimruns can be offered in the UK, and even in some of the “less rugged” parts of the country. It’s definitely a race I would do again (after more hill reps and reluctantly some track work!).

Huge thanks to Nicky, Chelsey and the As Keen As Mustard team for another great event, and especially how well they dealt with the fog that threatened to derail the whole day.

I’ll be at As Keen as Mustard’s Grafham Water event on 25th September to close out the Fenland Runner Grassroots Series.